There’s nothing like the death of a dear one to make you ask all the big questions.

Why do we do what we do?
How do we know who we know?
Why do things die when they die?
How does friendship survive?
How does love thrive?
What’s the point of doing anything?

The older I get, the longer I live, the more I think that the point of living is simply to make life that bit more bearable for other people.

You don’t know it, my friend, but you kind of showed me that. Not just for me but for countless others who knew you and loved you. You had an amazing talent for looking after people. You even made a living out of caring.

You took people in to your heart, your home. You gave them your time, your space, your energy, even when it cost you, even when it irked you, even when it pained you. Whoever it was, you always had your eye on their angle of vulnerability, and you did what you could to make it better.

Now we’re all taking in the news that you’ve gone. Suddenly and without fuss or fanfare you just slipped away quietly one night, hoped we wouldn’t notice. But we noticed. We’re going to be noticing for a long time that you’re no longer with us.

You were always such a plotter, a planner, a schemer. There was always a project to be getting on with, always a new destination to be setting off for. When we met that time back in East Kilbride at the end of 2015, some twenty years since the last time, it was the day before my birthday and everything was up in the air with both of us. I remember saying to you how much I had always admired this aspect of you, that you were always so firmly future focussed.

And suddenly we were the best of friends again, swapping music crushes, sudden pashes, flash-in-the-pan fads, new raves, old faves. Like twenty years were nothing. I assumed from that point on we’d stay friends into our old age, checking in, hanging out.

It was music that made friends of us back then, at that draughty old rehearsal studio out in the country lanes by Auldhouse. It was music that brought us close, that started conversations, that led to deep discussions long into the night. 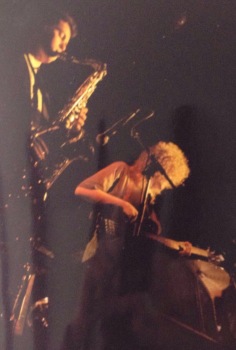 You had my name listed as “Sax” in your phone (was that the joke? “Sax in ma phone”?) which made me laugh, even though I haven’t played the thing in earnest in years. For me, Russ, you were all about the bass.

There’s so much music in my life because of you. Things I’d never have listened to in a lifetime have become lifelong companions because of you. There are bands who are indelibly stamped in my mind with your passion and enthusiasm, like a rock n’ roll tattoo. There are songs that conjure places, people, gigs, jams, days spent wandering, nights spent smoking menthol cigs in cars and bars in East Kilbride, Glasgow, London, New York, Boston, Worcester MA.

It’s impossible to list every single piece of music that magically sings of you, but here’s a few things kicking about my shelves at home that conjure you as I best remember you.

You liked proper proggy muso music. Long songs, extended solos, big looping bass lines. I only really knew Supertramp from their hippy-haired Top of the Pops hits; you were all about their early stuff, which I grew to love. Try Again was your favourite, you said, and my first entry point into your musical universe. Weird, trippy, slightly gothic, melodic, mellifluous and emotional.

But it was there in the air that we share in the twilight
Humming a sad song, where was our day gone
But in the dark was a spark, a remark I remember

It’s really all about that one song, Dream Gerrard, and that incredible wah-wah tenor sax. I remember buying a wah-wah pedal for £25, using it a couple of times on my own horn in the rehearsal studio then eventually passing it on to you (who made much better use of it). The song appeared on one of the mix tapes you made that I played a lot, which also contained another Traffic track that’s quintessentially you – The Low Spark of High-Heeled Boys – as well as a song you wrote and recorded yourself, called Gullible Travels, which I liked a lot.

You were amazed I even remembered the song, never mind quote the chorus to you…

I’m not usually big on lyrics, as you know. I’m paying more attention to them now though, especially the first song of this album, What I Am, and I wonder if the reason you loved it so much was because it seems to sum you up so well.

Or maybe it was just the wah-wah solo. I remember you describing me once as a “Bohemian”, which I thought was preposterous. But by East Kilbride standards, though, I suppose both of us probably were.

I’m thinking, obviously, of the first track, Keep Yourself Alive. It’s a rather cruel and ironic title given the circumstances, but I bet you’d allow yourself a chuckle. Or even a LOL. I never got on with Queen, though God knows you tried to win me to the cause. I eventually bought this album at your insistence and listening again now I think I hear something of what you heard. Adrenaline pumping hard-rockin bombast, a bunch of guys acting as if they were already superstars, doing wildly inventive things with guitars, and a massive flouncing fatally flawed show off in the middle of it all. It’s basically your anthem.

Another key piece of genetic material in your musical DNA. Not hard to see what appealed to you about this triumverate of turbocharged neo-prog hyper-rockers. And the 1991 Roll The Bones gig was a big one for us.

Again, the lyrics in the first track, Tom Sawyer,  seem to say meaningful things about you.  I don’t know. Pick a lyric.

The world is, the world is
Love and life are deep
Maybe as his eyes are wide 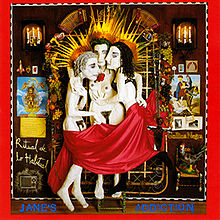 We played the bejesus out of this. Manicmetal. Mischief music. The song about shoplifting caught your ear by accident late one night on MTV, you passed it on like a flu bug. Every few days another track became a fevered favourite. Like we’d invited a pyromaniac worm into our ears. You’ll find this weird, but I always think of the song Of Course… as being about you and me. I have no idea what the song is actually about, but these lines spoke to me of our relationship: simultaneously close and aloof, affectionate and brusque, concerned and indifferent. Like brothers in music.

When I was a boy,
My big brother held on to my hands,
Then he made me slap my own face.
I looked up to him then, and still do.
He was trying to teach me something.
Now I know what it was!
Now I know what he meant!
Now I know how it is!

You used to send me things in the post. Ruth Gordon’s autobiography appeared one day – the Harold and Maude actor you had a massive thing for. You were so delighted to have found it from an ebay seller halfway across America. There was the card you made from a photo you’d taken congratulating me on a new job. Mostly it was music, of course – Future Islands, Tame Impala, couple of other things, chief among which was this album by the Scottish artist Anna Meredith which I grew to love enormously. I bought tickets for her band show in March at the CCA that I wanted you to come to but by then you were doing the First Bus thing and you couldn’t commit the time. Things moved so very quickly after that. The year passed in a blur and I saw you only a couple more times.

The Anna Meredith thing was so typical of you in so many ways. You were so open to new and interesting stuff. For every Rush or Bryan May gig we went to, there was an equivalent Ornette Coleman & Prime Time or John Zorn. And as much as you loved big bombastic cockrock, you could be just as passionate about female artists – Joni Mitchell, Ricky Lee Jones, Tracy Chapman, Oleta Adams, Aimee Mann.

Only latterly I found out we had a shared love of St Vincent. Now, since you’ve gone, I keep returning to her song about love and loss and New York. It always transports me to our week there in 1993 when you were heading to Worcester, MA, to begin a career in care and I was off on a transcontinental train trip.

All the things we did. That first sunset taxi ride into Manhattan from JFK, taking in that breathtaking skyline – a waterside city the height of the clouds, the colour of rust and diamonds. Staying at the Chelsea Y. Endless wanderings. Walking downtown to Battery Park from 110th St. Dinner in the Dojo. Tasting tahini. Camp Kiwago. Nights with Carolyn. Seymour’s house full of whales in Jersey. Then returning the next year when you were settled in Worcester and the madness of all that.

I was in New York recently and the wide city streets still ring with those memories.

and boy do I know it.